(also: i move into a new flat in about two weeks, regular development work is going to start up again pretty soon after that, sorry about the delay on everything…)

update2: more awesome stuff i want to play with: machinecollective.org

update3: some more info on the tonecore ddk, scrounged from the freescale website: (giant pdf thing) – short version, there’s 4Mb+ of onboard RAM (8 banks of 512kb plus whatever’s onboard the DSP), and it’s rated at about 100Mips. 24 bit. doesn’t look like there’s any FPU onboard, bah.

these screenshots are both from the same .nds file, just with different skins (everything you see is functional except the knobs on the 303). 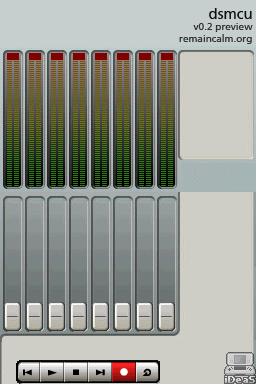 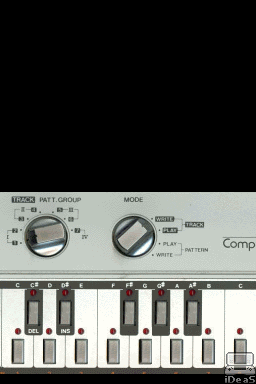 at the moment it’s running at 30fps – i’ll set it up so that it’ll run at 60fps in single-screen mode soon.

work is continuing on dsmcu. here’s what is in the new version so far:

no estimate on when it’ll be ready – i’m going to be moving house soon so that might slow me down a bit. but what’s there is working really well so far.

if anyone has gotten the beta working under leopard, can they let me know? cheers.

i think this is #2, anyway. should start getting pretty interesting by #5 or so.

(i’ve given up on picking a catchy name to release this stuff under, i figure my actual one will do for the time being)

i’ve put together a list of homebrew ds music apps. pretty sure i’ve gotten most of the main ones but if i’ve left anything off let me know via the comments and i’ll update it.

edit: added heaps more, thanks for the submissions!

here is a short video of dsmcu in use

dsmcu is a wireless mix controller for reaper (and possibly other applications if they tolerate my abuse of the particular midi control spec i’m using).

note: i haven’t had much of a chance to work on this lately and my ds is a bit sad, i’m only really posting this in the hope someone will donate a pink ds with a properly working touchscreen (black is also fine)

dsmcu is a nintendo-ds based emulator of the MCU control surface protocol. it talks to your audio workstation over wifi via dsmi.

CLICK HERE TO DOWNLOAD (beta software, please exercise care, no warranties expressed or implied, and you’ll need the readme file to get it working) requirements: a homebrew-capable ds (which can connect to your computer over wifi), compatible audio workstation software (like ‘reaper‘) and dsmi correctly set up on your computer. more details in the download link.

does not work with pro tools or logic yet, but support is planned

the following subset of the mcu protocol is supported:

some user interface elements have been taken from Reaper – BIG THANKS to White Tie and the Reaper posse for granting permission for use of this and helping out with design/layout. cheers again to tobw for the dsmi library. also uses palib and devkitpro/libnds, yay. » cocktail #1:
all the lychee syrup
150mL stolichnaya or 42 below vodka (or whatever)
rose flavouring? i guess if you have some handy that could work.

throw it in a cocktail shaker; shake and serve in a martini glass (maybe with a tiny chunk of turkish delight?)

» cocktail #2:
all the remaining lychees
150mL vodka
lots of ice

blend until slushy and drink

note that this doesn’t show the dsmi MIDI integration, only uses one of the default sample sets, doesn’t show any of the randomization functions, and there’s no theremin. i’ll post a better quality clip with some more fun stuff when i get a bit of spare time.

now that i’ve got some more space on the server, i should probably start posting some of these tracks i’ve had lying around for aeons.

just a tidy little dub, built up on the spot in a couple of layers using a headrush loop pedal.

the first in a potentially long sequence of dodgy cocktail recipes

blend until it looks like a daiquiri. optionally layer with a tiny bit of fresh cream and then top with cinnamon power. serve in whatever you have handy.

thought it was finally time i got around to re-posting a party mix i did at the beginning of the year:

Tags: mix, mp3
Posted in mixes, music | Comments Off on the fossil record

i’ve recently started using reaper as my main audio software. one of the best things about this thing is that it comes with a built-in plugin programming language. it’s pretty basic but you can do some cool stuff with it, and it’s way easier than futzing about with compilers and vst frameworks and garbage like that.

i’ve just released my first effect for this environment, called tonegate. it’s based on a number of other effects supplied with reaper – it’s really just a basic tone generator triggered off a gate, mainly to add sin, square or noise tones to kick or snare hits. tone type/pitch is configurable (the pitch can optionally raise or drop during tone decay), there’s a simple low pass filter and wet/dry mix.

this is a quick audio demo of the effect in action – first part is dry kick and snare tracks, second part has some (not-so) subtle sin and noise added to kick and snare, last one is way over the top. with enough of these you can do all sorts of weird nintendo-y sounding stuff:

bliptracker is stable, runs happily on most nintendo ds flash cards (tested working on R4DS and supercard), and supports custom sounds (up to four sets of six samples per ‘sample-set’).

as with any homebrew please backup your flash card before installation or use.

made with devkitpro.org and palib.info developer tools. Source code (GPL) – requires devkitpro r20, libdsmi, most recent palib + some minor tweaks to get it to compile against r20 (check the palib formums or mail me).

everything is broken! and new! but that’s okay. i’ll get around to cleaning up this layout properly at some point.

things from the old page are still kinda here: nds has the nintendo homebrew software ‘bliptracker’, there’s a flash game i helped with at oldgame.html, and some music and stuff up at mshopper and bsc, along with my new band which has a temporary home at myspace.